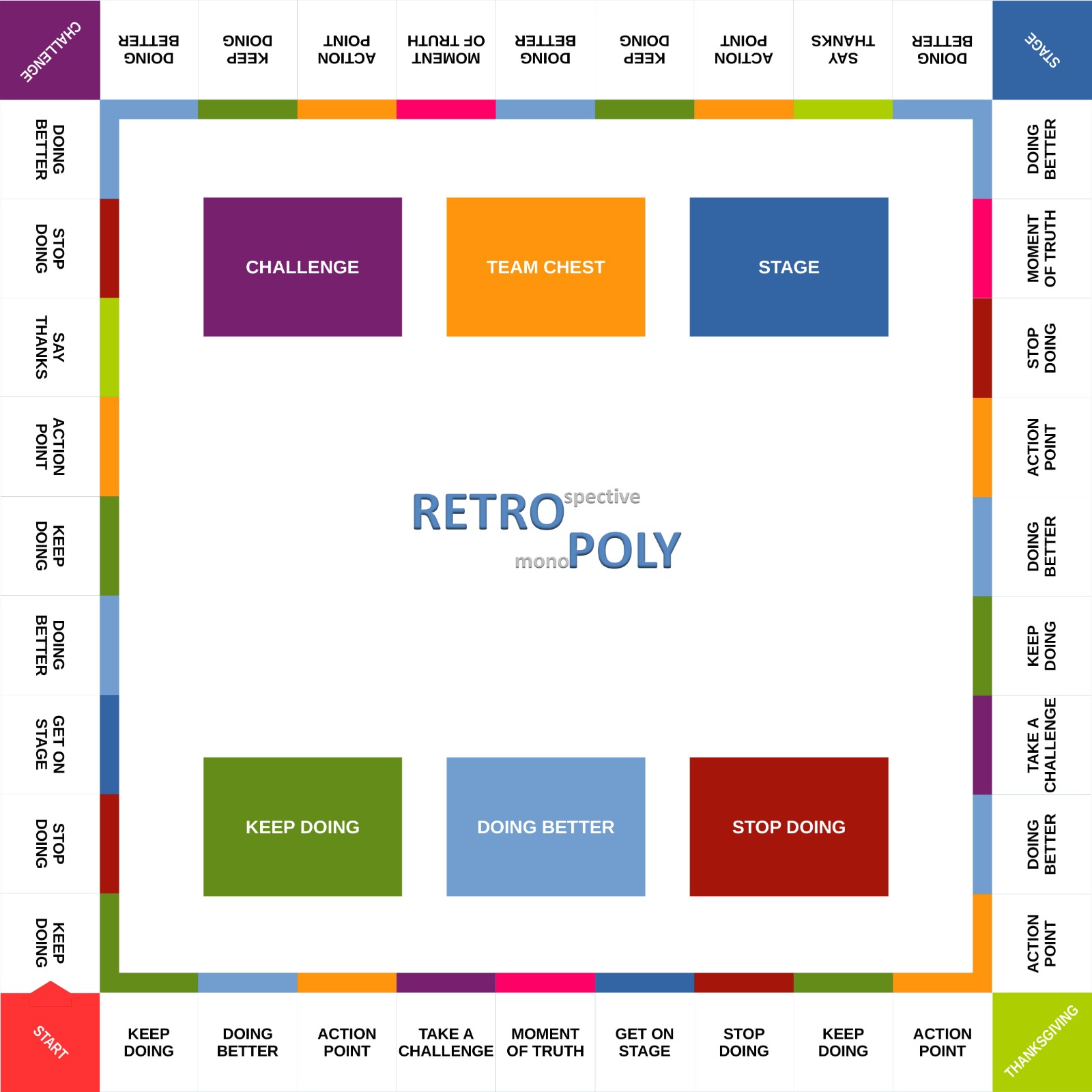 About the game
Retropoly is a game to be played during retrospective meetings of Agile teams. It is based on the Monopoly game concept. It is mainly designed for Scrum teams, but it is suitable with minor adjustments for any other Agile methodology. The game is basically a fun, yet practical, tool to apply the twelfth principle of Agile manifesto:

At regular intervals, the team reflects on how to become more effective,
then tunes and adjusts its behavior accordingly.

Learn more about the game!
Who can play it

Retropoly can be played by any Agile team with at least 5 members. Below this size of the team it is still possible to play the game, but the fun of it is partly lost due to the low number of Retrospective Cards.
There are three roles in this game: the Game Master, the Player and the Debate Facilitator.
The Game Master is a role played usually played by the Scrum Master / Retrospective Facilitator who organizes the game and serves as a referee. He/she is also representing the Bank.
The Player is also a role played by all the members of the team. On team request, relevant external persons might be invited to play the game.
The Debate Facilitator is a role which is played by one of the players. The Debate Facilitator acts as a moderator of the debates during one round of discussions. The Players are taking turns to play this role.

Because it allows the team to thoroughly go through all the aspects of a retrospective. The ceremony will run smoothly and its objectives will be easy to achieve, if everybody is following the game rules.
Because it allows the leaders that works with the team to conduct a meaningful team coaching. It will encourage an honest self-assessment of each member of the team and the positive feedback for the support provided by colleagues. It will improve the ability of the team to take common decisions in a timely manner and the practice of moderated debates.
Because it strengthen the team relationships by getting to know each other through sharing of personal life aspects, like hobbies and passions.
Because it allows to observe how retrospectives are improving over the time.
And last, but not least, because it is fun.

* These items can be downloaded from our site, the rest you need to procure it by yourself.

There is no copyright protection for Retropoly game concept, so you may use it freely. The author of this game, Sorin Sfîrlogea, considers that the game should and will evolve in the future based on the experiences of the practitioners that will use it. So we encourage you to contact us and let us know your impressions and the improvements that you identified while playing Retropoly. Thank you in advance for your comments and suggestions.